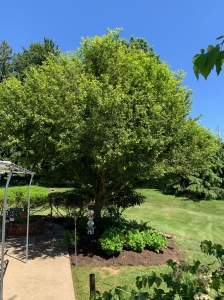 This morning, I happened to look up at the top of a tree growing next to my patio and was amazed to see how big it had become. I guess it must be nearly 50 feet tall. It stands in full view of its lower half from this little office where I compose my literary masterpieces. I have probably spent hours looking out at the lower portion of that tree while trying to organize some great truth, yet today is the first time I remember looking up at its top.

It has been 35 years since I planted it. It was a scrawny thing with a bulbous out-pouching around its base. I have no idea as to its species, but it has become a good friend. It has used all that energy from those years in the sun to grow into this magnificent specimen which now shields me with its shade. One of the reasons I was shocked to take in its full size is that its trunk does not appear to be large enough to support a giant upper body.

Fortunately, I had preempted Barb earlier in the day by wishing her a happy anniversary before she had an opportunity to put my failing memory to the test for, I have a history of forgetting such important dates. Barb on the other hand has one of those minds which has allowed her to catalog not only birthdays and anniversaries of immediate family, but of anyone else we have ever known. Actually, I had prepared for the event by squirreling away an old card which I planned to recycle for the event, but I misplaced it–thereby losing my opportunity to be a real hero.

The day held little promise of anything exciting, especially since there is not much about the number 67 to generate enthusiasm, but just as we were on the verge of declaring this anniversary a washout, son Peter called to say he and Sue were on their way here. They brought flowers, Pete did some of my chores, and got takeout from Bill’s Barbecue, which we enjoyed on the patio. Trudy had called previously to tell us they would be coming to spend the weekend of Father’s Day with us, and after Pete and Sue left we retrieved a voicemail from Maggie and a text with her flattering epistle about us old buggers and our marital style.

As for Maggie’s analysis of our “discussions” she mentioned, I am sure most of them ended with my surrender for I am still no match for Barb. But on the bright side she fights even harder FOR me. It is easier to find a lover than a friend, and to spend my life with someone who is both makes me a very lucky guy. Later Barb and I did some reminiscing, which was sort of like looking up at that tree to see whole thing.

The view was pleasing.

The progeny: The only thing better than perfect children is PERFECT GRANDCHILDREN

One thought on “ANNIVERSARY REVIEW by ESHRINK”