If any of you are regulars on this beat, you may have noticed that in deference to our increasing susceptibility to Trump fatigue, I have suspended my analyses of the Donald’s behaviors. You may rest assured however that they have not gone unnoticed, and that I have watched with great interest the current fruitless attempts to remove him from office.

It is appalling that, though judged obnoxious by most, his behaviors have been accepted and even admired by a large segment of the populace. His extreme repetition of lie after lie overwhelms truth. His cozy relationships with authoritarian rulers of the world is worrisome as is his impulsive and inconsistent decision making. He seems to find The Constitution to be inconvenient, and probably feels that without it, those pesky democrats could be forced to shut up and do as they are told. Meanwhile, those who praise him are granted the keys to the castle no matter their political leanings.

Those issues and others were bad enough, but now he has really pissed me off by attacking my heroine Greta Thunberg, a bona fide 21st century Joan of Arc. Although the Nobel Prize committee did not follow my advice by awarding the prize to Greta, she was named “Person of the Year” by Time Magazine. 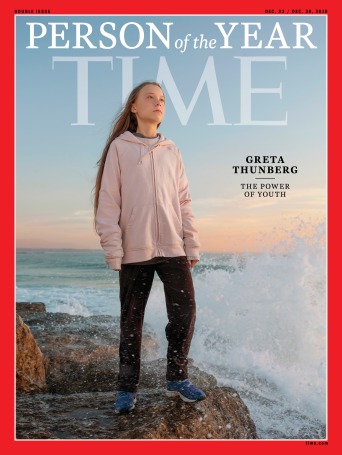 Upon learning of that, Trump the tweet master, posted as follows: “So ridiculous, Greta must work on her anger management problem, then go to a good old-fashioned movie with a friend. Chill Greta, chill.”

As one perfectly willing and able to take on the most powerful man in the world, Greta responded by changing her twitter profile to read:

“A teenager working to resolve her anger management problem. Currently chilling and watching a good old-fashioned movie with a friend.”

He obviously did not know who he was “messing with.” When asked if she would consider discussing her views on climate change with the president, Greta replied that in his case “It would be a waste of time.”

Mr. Trump was named “Person of the Year” upon his election in 2016, and has complained that he was not similarly rewarded in subsequent years. He does have a valid point as Jim Kelly, managing editor of Time, has defined an honoree as: “the person who most affected events of the year for better or worse.” For example, Hitler and Osama Bin Laden have been named in past years, so perhaps we should consider our dear leader for the dubious honor. I doubt he would care much as to which category he belonged as long as that magnificent head of hair was accurately depicted on the cover.

To be jealous of a teenage girl must be particularly difficult for a malignant narcissist. However, now that he has rid himself of those who did not always suck up and has surrounded himself with sycophants, he should recover. Meanwhile, in spite of my dismay, there is also some relief in hearing Senator McConnell guarantee that Trump will not be removed from office. As I mentioned in a previous blog, I am concerned as to the effect his being cornered could have on his already precarious mental state. The down side is that a not guilty verdict may well reinforce his conviction that Article II of The Constitution gives him the power to: “Do anything I want.”

Since I was a latecomer to the “Greatest Generation,” I confess that I have not always been enthusiastic about turning the keys over to today’s crop of teenagers. However; I am in awe of the activism of Greta’s generation (Click here to read Business Insider’s definition of Gen Z). The movement she started was inspired by the “March for Our Lives” movement to end gun violence, which was organized by survivors of the Parkland Florida High School massacre. Their march on Washington produced a crowd rivaling the size of the crowd at Trump’s inauguration (I trust he hasn’t heard of that comparison). 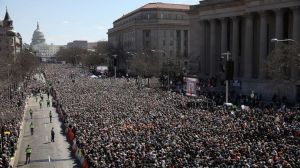 Only months after Greta began her protests alone with a hand-made sign in front of the Swedish parliament building, this petite 16 year-old girl with Asperger’s Syndrome has millions of followers in 150 countries, and is now the most recognizable climate change activist in the world. She has also been recognized in NATURE magazine as one of the 10 most influential people in science.

That millions of kids who chose to protest the inaction of we adults on the issues of gun violence and climate change could hardly be explained as simply an excuse to skip school. I have listened to excerpts from the speeches of several of these kids and have been incredibly impressed by their knowledge and vision. They demand action in place of platitudes. One of those high school kids from Parkland in an address at the D.C. rally made that clear when he stated in his speech: “Stand for us or beware. The voters are coming.” 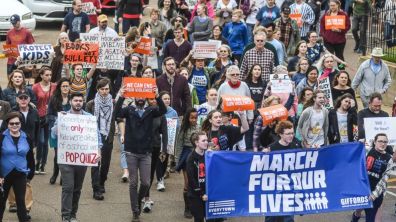 It all leads me to think the world will soon be in good hands. Go get em’ kids! The Greatest Generation is counting on you!

One thought on “DON’T MESS WITH GRETA!”