Those of you who read my Christmas letter may have noted that the Smith household has a newly adopted member.  Floyd came to us directly from our local dog pound following an intense campaign by myself and daughter Trudy to convince Barb of the benefits which would accrue from having a dog in the house.  Lilly, our beloved pit bull, had died over a year ago, which marks the longest time we had ever been without a dog. Trudy and Maggie had selected Lilly from an animal shelter, and Trudy had presented her to me as a birthday gift with the unambiguous promise that she would keep me young.  The problem with that rationale was that I was already old.  Barb objected to having another dog, but promptly fell in love with Lilly.  At Lilly’s death, we grieved as we always have when losing another “best friend,” and I eulogized her as the best dog we ever had, but Barb reminded me I say that about all our dogs when they die (Lilly was #10).

Barb had insisted that it was a bad idea for us to get another dog, and as usual she was right, but common sense has never been a priority for me.  Thus, Trudy and I conspired to get her out to the animal shelter to see a resident named Chloe, which Trudy had picked out for us.  We knew that if Barb would meet the dog, she would be hooked, for dogs were second only to babies as love objects to her.   Unfortunately, Chloe was adopted before we could get to see her, but I was not to be denied.  I proceeded to visit the dog pound looking for a likely candidate for adoption with the insight that the prospect of a dog threatened with euthanasia might promote Barb’s need to protect.

The strategy was successful.  I found a medium sized black and white dog of unknown lineage who was outgoing, affectionate and playful whom I coerced Barb into seeing.  When we arrived at the pound, Barb refused to go in as she did not want to see all those dogs locked in cages so I brought him out for her to meet him.  She reached out, he licked her hand, rolled over on his back presumably to get his belly rubbed, and it was love at first sight.  The attendant reported that he had been picked up as a stray and they had no information about him.  I remarked that he seemed frisky for a grown dog, and had also noticed that his paws seemed large for a dog of that size.  I reiterated my goals of having a full-grown dog who had outgrown the puppy phase, and who was unlikely to outlive us.  The attendant looked in his mouth, and with an air of authority she declared that he was certainly older.

I named him Floyd, after an uncle who I always thought was a bit strange.  I must admit, I had some concern about this dog’s compulsion to roll over on his back thereby exposing what was left of his genitalia with virtually every human encounter.  I could not find any literature about exhibitionism in dogs, but then whoever said that dogs couldn’t be perverts?  Someone told me that this behavior was nothing more than a sign of submissiveness, but when his chest or belly is rubbed he stretches out with a look of ecstasy in those brown eyes seeming to escape to another dimension of consciousness.  Is that weird or what?

Floyd adjusted quickly to his new environment and went from shy and submissive to controlling.  Thankfully, potty training went well, and there was only one accident. After, he was a model in that department, except for a couple of instances in which he was so excited to greet a visitor that, upon positioning for his customary belly rub, he produced a fountain of urine.  There was one near miss, but no direct hits.  His favorite site on which to lift his leg is unfortunately at my boxwood, which will undoubtedly suffer.  It didn’t take long for him to learn where the power lies in this house, and he soon was obeying Barb’s commands while ignoring mine.  He sits for her on command but not for me.  He has taken possession of my arm chair and refuses to leave when directed, but he will get out of hers on her command.

Extraction from my chair is a much different story.  Floyd is a devotee of the passive resistance strategy in such situations, and when asked to get down, he rolls his eyes, glances at me briefly, looks away and does not move a muscle.  Raising my voice to an authoritarian pitch likewise produces no response.  I am left with no alternative other than to forcibly drag him from the chair.  He offers no resistance, and falls to the floor in a lump as if totally paralyzed.  He reminds me of a sit-in demonstrator being dragged away.  He then lays there immobile as I stumble over him in an attempt to retrieve my rightful place.  Only after I am settled in does he finally get up and go to the couch where he is supposed to be, but not without a defiant stare. 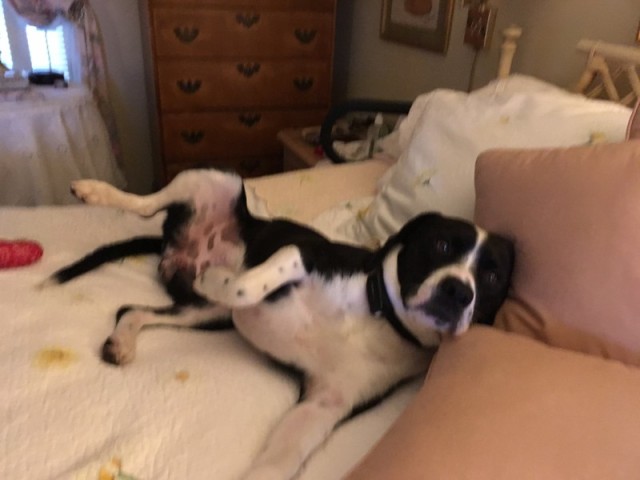 Floyd has proved to be a picky eater, having initially refused the less expensive dog foods in favor of the grain free variety, but he has developed a voracious appetite for footwear.  He is partial to shoes, but if they are not available he will settle for slippers.  As a matter of fact, as I write this, Barb just came into my office to announce that one of her shoes is missing, and cannot be found.  Fearing the worst, we set out on a rescue mission, and sure enough, the missing shoe was found relatively undamaged on the patio.  We attempted as we always do to impress upon Floyd the seriousness of this crime, but he simply wags his tail and rolls over on his back with legs widespread, lacking even a shred of modesty.

Although shoes are his favorite, Floyd is every bit the classic omnivore.  Yesterday, he consumed a box of crackers we left on the counter.  He demonstrated his athletic prowess the other day by leaping nearly four feet to get some peanuts Barb had left for the squirrels on a pillar in the backyard.  He consumed the shells and all in short order, and this is the guy who is picky about his dog food.  Go figure.

Floyd definitely shows signs of having oral personality traits.  His chewing is not limited to shoes.  In our attempt to divert him from his favorite object, we have provided him with all sorts of chew toys, most of which he destroys in a matter of minutes.  I was told that dogs who chew excessively are usually bored and don’t get enough exercise.  To that end, as the weather recently improved I took him outside and threw a ball which he vigorously went after.  I encouraged him to bring it back so we could repeat the game, but he simply sat down and chewed it.

The chewing fetish seems to be unending.  He was recently interrupted as Barb found him chewing on the woodwork in the family room.  There are also less challenging items which he seems to enjoy.  For example, he was recently discovered on our bed surrounded by fluff and an empty pillow cover.  He has proven to be remarkably adaptable to his new environment and yesterday he was discovered opening the door to Barb’s closet.  He seems to know the location of every shoe in the house, but he must have thought he had discovered the mother load after viewing the contents of that closet.

Floyd seemed puzzled by automobiles initially, and we were forced to drag him into the car for his first ride, but he quickly became an enthusiastic traveler.  He prefers the front passenger seat where he gets a better view, apparently.  This causes some dissension between he and Barb, and he can become downright unruly when forced to the backseat.  He feels it is his inalienable right to be a passenger whenever the car leaves, and he makes that clear by leaping up and scratching at the side of the car whenever someone enters the garage.  On one occasion, he leaped in when I was reaching in for something and refused to leave.  Two hours later he was still there.

In spite of his defects I must admit that Floyd is very intelligent.  This is borne out not only by his ability to consistently outsmart me, but by an extensive vocabulary which I am convinced is unique to the canine world.  It is so varied that I have yet to translate his speech in detail.  Of course all dogs bark and whine to express themselves, but Floyd often opens his mouth as if yawning and proceeds to utter multiple sounds the like of which I have never heard come out of a dog’s mouth.  He also must have channeled from his wolf ancestors the ability to howl, for when he hears a siren or other distant sound, he points his head to the sky and produces a long mournful sound loud enough to be heard for miles.

You may recall that the Floyd misadventure began with Trudy’s well-meaning plan to help Barb and I delay senility.  Sadly, I must confess that although that grand experiment is still in its infancy, preliminary findings suggest that there may be many unintended consequences.  Of course, the stresses for Barb are intense as she sees her house destroyed, and selfish me, I don’t enjoy the fallout.  There was also the assault on my physical well-being by Floyd, for which he feigned contrition, but the incident did occur shortly after a strong reprimand from me.  It occurred as Floyd was lying in the doorway to my office, as is his usual habit.  While leaving, I was forced to step over him, but then he suddenly got up, causing me to trip over him.  As I was going down for the count, my ear collided with the door frame.  This was particularly traumatic as the anti-coagulant warfarin (aka rat poison), which I take, complicated the problem, resulting in a huge hematoma on my ear which subsequently became black.  I was born with famously large ears, but this was ridiculous.  The good news is that it seems likely that I will be able to avoid amputation.

As if on cue, Floyd has just entered this room with the remains of another pillow in his mouth, and trailing is a string of that fluffy stuff used to fill pillows.  He has that “look at what I have done” smile. He holds his head high and seems proud of his accomplishment.

Before concluding, I feel I must give the devil his just dues (yes, I sometimes wonder if that guy with the horns and pitchfork may play a part in this), for Floyd does have some redeeming social value. In between destructive forays he is very affectionate and displays that disarming smile that could melt the hardest heart. To know that a creature is awaiting your return and will greet you with unbounded joy may even be worth several pairs of shoes. Besides, they don’t accept returns at the pound.  With that in mind, I will start thinking about purchasing a larger crate (dog people don’t like the word cage), as his body has already inched toward matching those big paws. Yes, it appears that Floyd may be just a larger-than-usual puppy.