Those who are interested in my well-being (there must be thousands) will be pleased to learn that I am recuperating satisfactorily from our recently completed family vacation.  This was the 23rd such event in which progeny and their spouses were included. Although previously there had been years of nuclear family vacations a la the Griswalds, some of which have been chronicled in prior issues of this blog, this year’s version was uneventful. We completed the week without a single emergency room visit, and it was cited by several as “the best vacation ever.”

With much difficulty, we had been able to find a week when all 13 could attend.  Only 4 previous vacations had been held in land locked locations with the others at various beaches, from Cape Cod to Florida.  As reigning patriarch, I suggested this year we should go west to the mountains. To my surprise, there was unanimous agreement (a rare condition in this family) to the change in venue, and soon a house large enough to comfortably house us was procured.  It was located on a mountain above Breckenridge Colorado, elevation 9600 feet.

At this point, I asked myself the question: “What kind of idiot with diminished lung capacity would take a vacation at altitudes where oxygen is in short supply?” It is even less comprehensible when that idiot is also a physician who is supposed to know about that stuff. Of course, those questions are rhetorical and do not require answers, so those of you who leave comments need not provide them.

Research into the subject of altitude sickness in puny people was not productive.  One paper emphasized the value of good hydration while another recommended the use of Diamox, which is a diuretic causing, among other things, dehydration.  This seemed to me analogous to attempting to put out a fire with gasoline.  My Internist predicted my Oxygen saturation level would probably drop to 90% which I would probably survive, but anything lower than that would be trouble.  My cardiologist suggested that I should leave if I couldn’t breathe (why hadn’t I thought of that?).  On arrival, I found there must be many other puny people for oxygen was doled out at a lounge which operated much like a Starbucks, where one could relax and take as many whiffs as he liked.  The kids rented an O2 generator and I was able to indulge at will, but thankfully remain housebound.

The breathlessness I experienced dashed any hopes I might have had to do mountain climbing, but that was no great loss as I am seriously acrophobic. There were secondary gains in that it allowed me to read, and continue my sedentary lifestyle without criticism.  I was able to experience all kinds of adventures vicariously via daily wrap ups supplemented by iPhone photos, not to mention the pampering which I found most agreeable.

Tradition demanded that each branch of the family volunteer to prepare dinner one night of the week.  This year the cousins were assigned a night and did a bang up job.  Barb’s chili, always a favorite, came up short, literally that is. She had underestimated the capacity of those hiking, mountain biking, white water rafting, horseback riding appetites and the pot did not even survive the first round which gave the kids an excuse to head down the mountain and pig out on hamburgers and such.

The family did befriend a long time resident of the area.  Fred was first seen looking into the kitchen through the patio door as were getting ready to eat.  Not coincidentally, he would return each evening at dinner time to take advantage of our generosity.  As a matter of fact, on our last night, he returned with Mrs. Fox and Freddy Jr., who also seemed to enjoy their dining experience.  In our family, volume rules in any discourse, and Maggie’s objection to feeding a wild animal were soon drowned out by rationalizations that one could hardly consider an animal who eats out of one’s hand to be wild. Plus the fact that he had become dependent on we naïve tourists seemed to be working out well for him and his family.  Besides, feeding a fox shouldn’t be compared to feeding a grizzly bear.

Our gang’s sojourn on the mountain ended all too soon, and I think all had a good time. As for me, I learned that although shortness of breath can be very inconvenient, under the right circumstances, it can offer significant advantages. 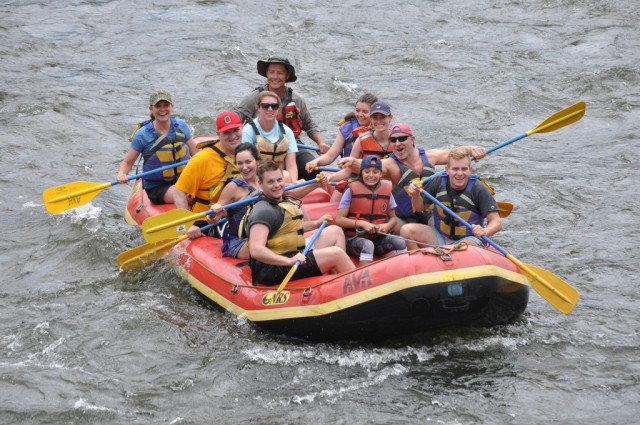 9 thoughts on “A VACATION TO TAKE YOUR BREATH AWAY”